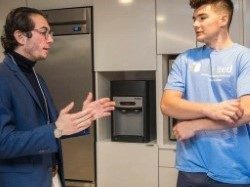 You’re never too young to found a business (or two).

Meet Dan Murphy—class of ‘21, economics major, founder of Rize Solutions Inc, founder of In-Connect, partner at HeliumIQ and partner at Gusher. Murphy transferred to Davidson College this spring semester after a year and a half of building some exciting entrepreneurial achievements during his freshman year of college at Susquehanna University. During his freshman year there he became the CEO and founder of In-Connect, a social network where entrepreneurs can find resources and other like-minded entrepreneurs.

Soon after the start of In-Connect, Murphy met the CEO of HeliumIQ, Steve Boerner. After realizing their two companies shared many of the same goals and interests, the two entrepreneurs merged their companies. From this merger, not only did Murphy get an exciting new opportunity but also a mentor who became an integral part of his success.

“[Boerner] helped mold my first experience as an entrepreneur, and that’s when I think entrepreneurs are most fragile;if they don’t have a good experience the first time then they are unlikely to continue,” Murphy said.  “He took a chance on me and ever since then he has really helped and advocated for me. Without him I don’t think I would have continued.”

With the help of his new mentor, Murphy followed his passion of finding innovative and seamless ways for entrepreneurs to network, connect and develop their ideas into businesses. This led Murphy to found his second business—all before sophomore year of college—Rize Solutions Inc. This network connects entrepreneurs with service providers.

What does the future look like for Murphy and his partners? They will continue to expand their  businesses, especially into universities and internationally. Now, just as his team advanced their international networks in places like Amsterdam and Israel, Murphy advanced his education by transferring to Davidson College.

Not only was Davidson one of Murphy’s top choices while in high school, but he also believes such a rich ecosystem could help him to expand his business by generating great new ideas.

“By coming to Davidson I am hoping to meet more like-minded people in a rigorous academic environment. With these different passions surrounding me and my experience as an entrepreneur—fingers crossed—I think some pretty awesome things could happen,” Murphy said.

By Lucy Fasano ’21, Resident Storyteller at The Hurt Hub