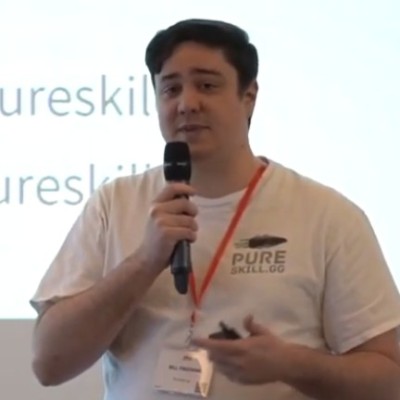 Tell me about your business, PureSkill.gg. Can you describe it in 2 sentences?

PureSkill.gg is an automated AI videogame coach. We help players get better by telling them what they’re doing wrong and how to fix it.

When did you start PureSkill.gg and why?

It started as a project to get myself into Data Science after graduating with a Ph.D. in physics. This was in late 2018. I wanted to explore data that I enjoyed working with (video game replay files). On the side, I was helping players who were struggling to get better with their play. The combination of these two is basically where PureSkill.gg came from. I met my two co-founders in graduate school and we had stayed connected through playing videogames.

Now, what’s one thing we should know about Bill Freeman that most people don’t know?

I played the saxophone for 10 years and at LSU during my freshman year.  I also played Rugby for LSU my sophomore year!

Has  PureSkill.gg  made any pivots recently due to COVID-19?

Gaming is one of the industries that is increasing during this time. Our business plan has not fundamentally changed but we are moving faster. The NC IDEA Micro grant came just at the right time to help us do that.

Congrats on the NC IDEA Micro Grant (1 of only 16 companies to be awarded $10,000)! Can you tell me a little bit about your application process and how you plan to use the grant money?

This is the third time I have applied for a grant from NC IDEA. The first time was in 2018 before the business was fully formed. The second time was the fall of 2019 when we were further along. Those first two were applications to the SEED grant ($50,000) and then we switched to the Micro-Grant for the third time. It was helpful to go through and answer the application questions. It teaches you what you don’t know about your business. Each time, the application process got easier and we were able to complete it faster.

We are using most of the funds to update the frontend of our application. Right now we have built a lot of the backend software but the frontend is not where we want it to be. The microgrant will help push us forward.

We have three co-founders. Me in Mooresville, Evan Sosenko in San Francisco and Ethan Batson in Seattle. From the beginning, our company has always been remote so that has not changed with us. With the funds, we are bringing in a front-end contractor.

Have you leveraged the Hurt Hub@Davidson’s network during this time? If so, how?

Yes, I have used a lot of resources out of The Hurt Hub. I attend Startup Grind Meetings, Pitch Breakfast, and 1 Million Cups. We also have two business mentors from The Hurt Hub Mentor Program. Additionally, I participated in a panel about esports investing at The Hurt Hub and I have leveraged the surrounding Charlotte entrepreneurial ecosystem.

I think I found out about the NC IDEA grants through something at The Hurt Hub!

How have you or your company grown since entering The Hurt Hub Mentor Program?

It was a very easy process to get mentors through The Hurt Hub. We have had a few meetings with them and they have helped advise on a few tricky business problems.

What are the next steps for you?

The end result of the front end revamp will be a “pay what you want”, Kickstarter style of monetization. This will help us understand how much people will pay for our product at an early stage (when we don’t have a complete product yet). We believe this will be a good indicator of our long term success.

What keeps you up at night these days?

The level of power that game developers have. Game developers have shut down similar companies for helping players while they are playing the game (which gives them an unfair advantage). We always help after they’re done playing, and we are confident that the symbiotic nature of our product with the game developers will only lead us to a good relationship.

What is one of the best or most worthwhile investments you’ve made for your business? (Could be an investment of money, time, energy, etc.)

I think our WordPress developer is our best investment. We lucked out by finding a low-cost overseas contractor who did really high-quality work to get some of our very early work done.

What is a common advice, business philosophy, or metric that you do not subscribe to or actively advocate against? Why?

I think I might be against most advice in general. You know your business the best so be careful about taking advice. Feel free to not take everyone’s advice.

Even though two of our co-founders are not in Charlotte, this is very much Charlotte-based company. A ton of resources have come of Charlotte and that is from all the networking and connecting that I’ve down here. The Hurt Hub has really helped out.